npm, Inc. recently announced the release of version 5.0.0 of the npm client and we are happy to include this significant new version within Node.js 8.0.0.

Node.js 8.0.0 ships with V8 5.8, a significant update to the JavaScript runtime that includes major improvements in performance and developer facing APIs. Most significant for Node.js developers is the fact that V8 5.8 is guaranteed to have forwards ABI compatibility with V8 5.9 and the upcoming V8 6.0, which will help to ensure stability of the Node.js native addon ecosystem. During Node.js 8's lifetime, we plan to move to 5.9 and possibly even 6.0.

The V8 5.8 engine also helps set up a pending transition to the new TurboFan + Ignition compiler pipeline, which promises to provide significant new performance optimizations for all Node.js applications. Although they have existed in previous versions of V8, TurboFan and Ignition will be enabled by default for the first time in V8 5.9. The new compiler pipeline represents such a significant change that the Node.js Core Technical Committee (CTC) chose to postpone the Node.js 8 release, originally scheduled for April, in order to better accommodate it.

For Node.js developers who use or create native addons, the new experimental Node.js API (N-API) is a significant advancement over the existing Native Abstractions for Node.js (nan) that will allow native addons to be compiled once on a system and used across multiple versions of Node.js.

By providing a new virtual machine agnostic Application Binary Interface (ABI), it becomes possible for native addons to work not only against multiple versions of the V8 JavaScript runtime, but Microsoft's Chakra-Core runtime as well.

The N-API is experimental in Node.js 8.0.0, so significant changes in the implementation and API should be expected. Native addon developers are encouraged to begin working with the API as soon as possible and to provide feedback that will be necessary to ensure that the new API meets the needs of the ecosystem.

The experimental async_hooks module (formerly async_wrap) has received a major upgrade in 8.0.0. This diagnostics API allows developers a means of monitoring the operation of the Node.js event loop, tracking asynchronous requests and handles through their complete lifecycle. Complete documentation for the new module is still incomplete and users should take great care when using the experimental new module.

An experimental URL API implemented around the WHATWG URL Standard was added to Node.js 7.x last year and has been under active development ever since. We are excited to announce that as of 8.0.0, the new URL implementation is now a fully supported, non-experimental API within Node.js. An example usage is shown below, with more details available in the official documentation.

This new URL implementation is most significant in that it matches the URL implementation and API available in modern Web Browsers like Chrome, Firefox, Edge, and Safari, allowing code using URLs to be shared across environments.

A number of important changes have been made to the Buffer API within Node.js. Most significant is the fact that calling the deprecated Buffer(num) constructor (with or without the new keyword) will return a zero-filled Buffer instance. Prior versions of Node.js would return uninitialized memory, which could contain potentially sensitive data.

In Node.js 6.0.0, a new set of Buffer construction methods were introduced as an alternative to calling the Buffer(num) constructor in order to address a number of security and usability concerns. The existing constructor, however, is used extensively throughout the Node.js ecosystem, making it infeasible for us to fully deprecate or disable it without causing significant breakage.

Zero-filling new instances of Buffer(num) by default will have a significant impact on performance. Developers should move to the new Buffer.allocUnsafe(num) API if they wish to allocate Buffer instances with uninitialized memory. Examples of zero-filled and uninitialized Buffer creation in Node.js 8 are shown below.

Note that while there are no current plans to remove the Buffer(num) constructor from Node.js, its continued use is deprecated.

To make it easier to catch uses of Buffer(num) within an application at development time or within CI testing environments, a new --pending-deprecation command-line flag and matching NODE_PENDING_DEPRECATION=1 environment variable have been added that will cause Node.js to emit DeprecationWarning process warnings when Buffer(num) (and other potential pending deprecations) are used. These are off by default in order to keep such deprecations from impacting production applications. An example which enables pending deprecations is shown below.

Node.js 8.0.0 includes a new util.promisify() API that allows standard Node.js callback style APIs to be wrapped in a function that returns a Promise. An example use of util.promisify() is shown below.

console.log(), console.error() and other methods available through the console module in Node.js allow application output to be directed either to stdout, stderr or pipes. Previously, errors that occurred while attempting to write console output to the underlying stream would cause the Node.js application to crash. Starting with 8.0.0 such errors will be silently ignored, making use of console.log() and the other APIs safer. It will be possible to maintain legacy behavior related to errors via an ignoreErrors option passed to the Console constructor.

We have started the process of assigning static error codes to all errors generated by Node.js. While it will take some time for every error to be assigned a code, a handful have been updated within 8.0.0. These error codes are guaranteed not to change even if the error type or message changes.

Codes are manifest to the user in two ways:

For instance, calling assert(false) will generate the following AssertionError:

Processing warnings such as deprecations may now be redirected to a file by using either the --redirect-warnings={file} command line argument or matching NODE_REDIRECT_WARNINGS={file} environment variable. Rather than printing warnings out to stderr by default, warnings will be written out to the specified file, allowing those to be analyzed separately from an application's primary output.

The legacy command line debugger is being removed in Node.js 8. As a command line replacement, node-inspect has been integrated directly into the Node.js runtime. Additionally, the V8 Inspector debugger, which arrived previously as an experimental feature in Node.js 6, is being upgraded to a fully supported feature.

A new experimental JavaScript API for the Inspector protocol has been introduced enabling developers new ways of leveraging the debug protocol to inspect running Node.js processes.

Note that the inspector API is experimental and may change significantly.

Node.js 8 is the next release line to enter Long Term Support (LTS). This is scheduled to happen in October 2017. Once Node.js 8 transitions to LTS, it will receive the code name Carbon. 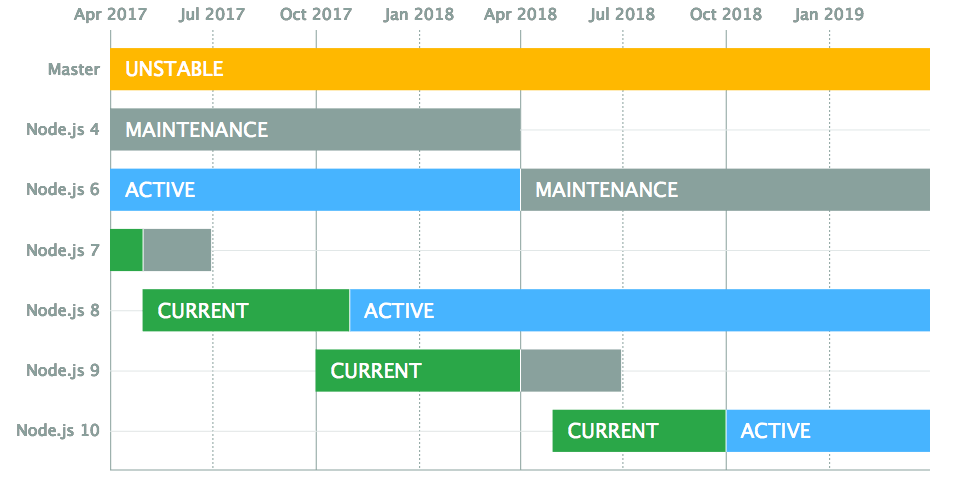 Note that, when referring to Node.js release versions, we have dropped the "v" in Node.js 8. Previous versions were commonly referred to as v0.10, v0.12, v4, v6, etc. In order to avoid confusion with V8, the underlying JavaScript engine, we've dropped the "v" and call it Node.js 8.